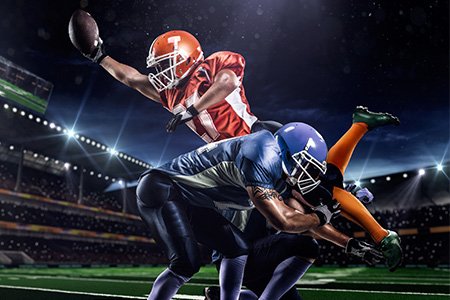 Make bets on American football at GGBet.com with lucrative odds and bonuses! To create account on our website, you need to be of legal age and provide your email and phone number. Once your account is set, the entire functionality of the website will be available to you.

Currently American football is the main sport in United States – it has the highest viewership numbers and is widely played in schools and universities. The main American football competition is NHL, which solidified its leading position in 1960s after absorbing the rival league AFL. Today National Football League consists of two conferences, and each of them includes 16 teams. Each season is split into three stages:

Each team has to play at least four matches during the preseason. The matches are played for entertainment only, as their results do not affect teams’ rankings. For this reason, some teams do not play to the full extent of their power and instead treat preseason as a training ground and a chance to study their opponents.

The regular season lasts for 17 weeks, during which each team has to play 16 matches – overall, 256 matches are played during the season. The high number of regular matches make it significantly easier to find a betting option with profitable odds. Each conference sends six best teams to the next stage.

During the playoffs, teams are eliminated after their first lost match. Teams of different conferences start in different part of the bracket. Thereby, the grand final called Super Bowl features the best teams from each conference.

American football is also popular in Canada. Their local league – CNL – features nine teams that represent different cities. In Europe, national teams compete in the continental league called European Championship. Finland is the most successful nation with five titles under their belt.

GGBet.com accepts bets on all main sports competitions, offering some of the best odds among online bookmakers. The most basic betting lines for American football are Winner, 1x2, Overtime, Total, Handicap, Odd/Even and others. Our users can also make outright bets, trying to predict a winner of an event, as well as make LIVE-bets on ongoing events.