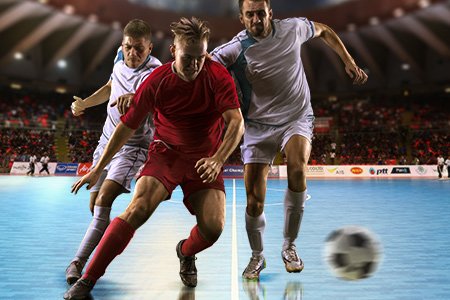 Futsal is exactly what you can expect from a sport called this way: it is a association football form played indoors on a hard court. The game was invented in the first half of the previous century in Uruguay, and to the present day remains especially popular in South America. The game is also very popular in Indonesia, and is rapidly gaining traction in Europe, especially Spain and France.

How is Futsal Played

Futsal is a more fast-paced game compared to the traditional football, which is based on several key differentiations:

In other aspects futsal is almost identical to the usual version of the game, however these features are enough to ensure unique experience for both players and viewers. It is reported that futsal is also often used in a training process for the “big” clubs, as the game has a greater focus on individual play and does not depend on weather conditions.

In an unusual way, futsal is simultaneously governed by two bodies – Switzerland-based FIFA and AMF with headquarters in Paraguay. Each of them are organizing their own competitions, including World Cups. Due to this, there are always many matches to make bets on.

In you are interested in futsal betting, you have come to the right place – GGBet.com covers all national and club competitions and offers some of the best odds among online bookmakers. To start making bets, you need to undergo a fast registration process. If you have any questions, contact our customer support that works 24/7.