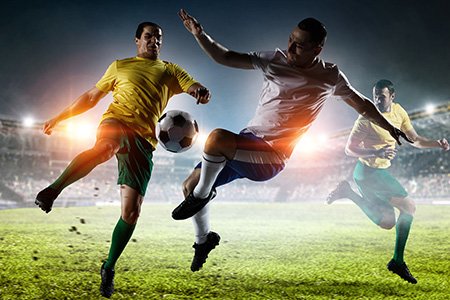 Association football is the most popular sport in the world, which is played by more than 250MM people across the globe. The game is especially popular in Europe. In most countries, excluding United States, Canada, China and India, football is also the most watched sport game. If you are into sports betting, than football is the most obvious choice as there are multiple high-profile matches happening literally every day.

The professional scene of football, or soccer as they call it in the States, is governed by FIFA, which oversees competitions in six regional confederations divided into more than 200 national associations. There are international competitions for national teams as well as regional leagues for clubs, with both of them enjoying great popularity among those who are into placing bets and ordinary sports fans.

The most prestigious competition for national teams is FIFA World Cup, which is being held every four years and includes separate competitions for men and women. As for the club competitions, the most viewed tournament is UEFA Champions League, which is organized annually and determines the best European football team. England remains one of the leading regions, with their two main leagues – Premier League and English Football League – being among the most viewed soccer tournaments.

Football is the most represented sport game on our website. Unlike other bookmakers, GGBet.com allows you to place bets not only on the main soccer competitions, such as EFL League One, but also on almost all minor leagues.

The main advantages of using GGBet.com are:

Do not have an account yet? Do not worry, creating one will not take longer than several minutes, and even faster if you decide to use one of your existing social network accounts! Once your account is set, you will be able to make bets on your favourite teams, predict match scores and winners of competitions.