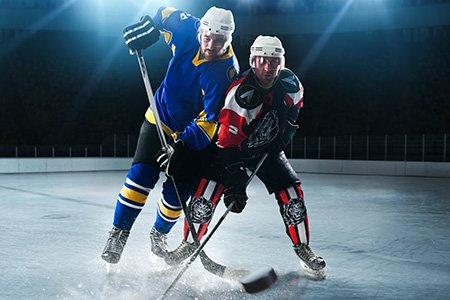 Make bets at GGBET.com on all main hockey competitions with best odds – World Championship, NHL (United States, Canada), German League, KHL (Russia, Belarus, etc) and others. Quick registration, robust user-interface and fast withdrawal process – this is why our web portal is the best place to make bets on sports.

In some countries, namely Canada and Finland, hockey is the most watched sport. The game is also among leaders in USA, and Czech Republic. If you are interested in making bets on ice hockey, you will be pleasantly surprised by the amount of competitions happening regularly. Besides the World Championship, which is being held by IIHF annually since 1920, there are multiple global and local leagues.

NHL, which includes teams from United States and Canada, is the world leader in terms of following and revenues. Switzerland’s National League is the second most popular competition by average attendance. The third place is taken by KHL, a Russian league that also includes teams from Eastern Europe. The leagues of Germany and Sweden complete the top five of the most popular leagues. Often countries host several leagues – for example, United States have a developmental league called AHL.

Online bookmaker GGBet.com accepts bets on hockey and other sports, offering our users vide range of betting options. For hockey, the most basic betting lines are:

To start betting, create an account and make the first deposit, and do not forget to check for the bonuses!