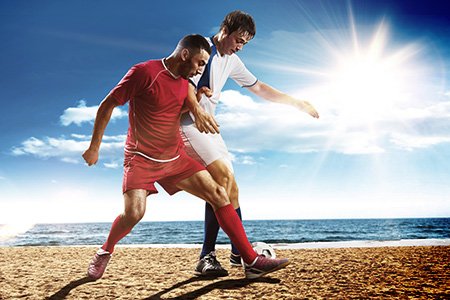 Make bets on beach football, one of the youngest and fast-growing types of traditional football. Online bookmaker GGBet.com offers its users lucrative odds, rewarding regular bonuses as well as a wide range of tournaments and matches for betting.

The game became an independent professional sport in 1992, when BSWW was formed. The organization adopted the first set of rules and starting to organize world championships and other tournaments. In 2005, BSWW was absorbed by FIFA, and nowadays it is the main governing body in beach soccer.

Despite its similarities with association football, the beach version has a number of serious of distinctive features. Athletes have to endure much more serious physical load due to playing on sand, hence decreased field area and shorter match length: in beach football, teams of five participate in three rounds of 12 minutes on a 35x25m field. Thanks to a smaller field arena, athletes can score goals from almost anywhere, which resulted in significantly higher number of goals – on the average, a goal is scored each 3-4 minutes.

FIFA organizes World Cups biyearly. Brazil has the most competitive national team – they managed to win 14 out of 20 world championships. Among other premier international events are Intercontinental Cup and Mundialito. There are also six regional confederations in:

Due to a high number of international and regional tournaments being held regularly, it is almost always possible to find a match with tasty odds.

Our website accepts bets on wide range of sports disciplines, including beach soccer. To start using our website, you need to be of legal and have an active account. To create it, you need to provide your email and phone number. We work with all main payment providers to ensure that our users do not have any problems with depositing and withdrawing money. In case you have any questions, feel free to contact our customer support service.