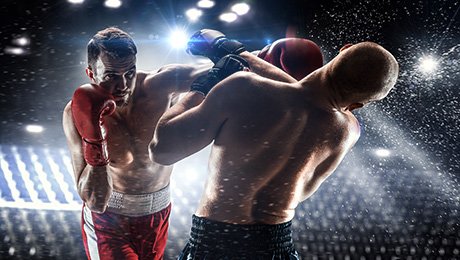 Boxing as a sport has a very rich history, with its first ruleset being created in Ancient Greece, in which boxing was part of Olympic Games. The modern version of rules was created in the 19th century in Great Britain, and nowadays boxing is the most popular combat sport in the world.

Amateur boxing emerged in the 19th century as a safer alternative to its professional counterpart: it has shorter bouts and the scoring is focused more on clean hits rather than damage done. Earlier all athletes used to wear protective helmets, but since 2016 head protection isn’t used in men’s competitions. As for duration, men usually compete in three rounds of three minutes, while women’s competition feature four rounds that last for two minutes. Amateur boxing is widely practiced at collegiate level and is part of Olympic Games, it also has its own official world federation called AIBA.

In professional boxing the athletes fight for a purse, which is divided between two competitors. The athletes don’t wear any head protection, only the gloves. The duration of bouts is limited to twelve rounds, which is significantly more than in its amateur version. The result of a bout is determined either by knockout, disqualification or by decision of referee. The bouts are usually organized by major sanctioning bodies, such as IBF, WBA, WBC or WBO. Each of these organizations held world championships in seventeen weight divisions.

Looking for a place for boxing betting with best odds? Look no further! We are confident that GGbet.com can provide you the best betting experience possible thanks to:

You will be pleasantly surprised by the easy and fast registration process, wide variety of payment options and the quality of our 24/7 customer support. Besides boxing, you can bet your money on other popular sports, such as football, tennis, hockey and others.