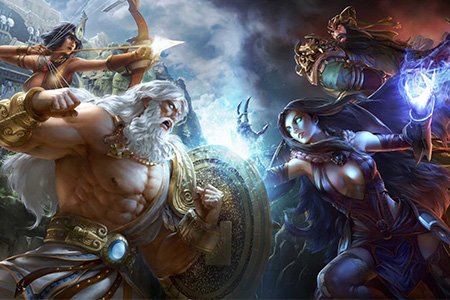 Being a MOBA game just as Dota 2 or League of Legends, Smite has one significant distinction from the other games of the genre – it uses third-person perspective, which significantly changes the impressions players get from the gameplay. Many companies tried to develop similar games, but only Hi-Rez Studios succeeded – their game released in 2014 on PC (currently distributed through Steam) and currently is also available on all main consoles. Due to high interest to the game, the developers actively support the esports scene and organize regular competitions, which GGBet.com’s users can place bets on.

The competitive scene of Smite is under complete control of the developers, as there are no third-party tournaments. Hi-Rez Studios have been organizing annual world championships since 2015; generally prize pools of such tournaments are set around $1,000,000. The participants of the main event are determined in the SMITE Pro League (SPL), which since 2018 is being held as a LAN-event in Alpharetta, Georgia. The league is split into two phases with a mid-season event between them. As Smite is available on different platforms, players can compete not only on PC, but also on PlayStation and Xbox. Thanks to the strict structure of the competitive season, the streams are scheduled so that as many fans as possible can view them.

The users of GGBet.com can make bets on all Smite events with best odds. To start betting, you need to create an account on our website and make your first deposit choosing from one of many available payment methods. Once your account is set, be sure to check your profile or the news section for the bonuses. Besides Smite, our website accept bets on other esports titles, such as

If you have additional questions, be sure to contact our customer support service!