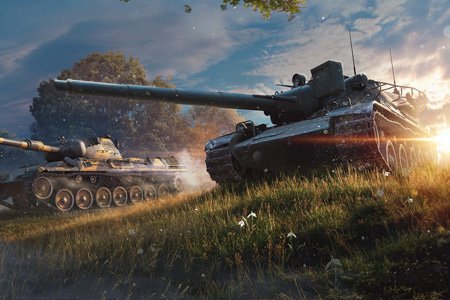 Being one of the first games to popularize military vehicular combat games, World of Tanks remains alive and well even after 10 years since its release, with developers constantly updating and improving the game by adding new content and even introducing crucial changes to its engine, which allowed to significantly improve the game’s visuals and maps. Currently WoT is available on Windows and Mac, as well as one Xbox 360 as well as on the latest generation of consoles. Besides that, there is a mobile version of the game called World of Tanks Rush.

Gameplay of World of Tanks

At the heart of WoT is a combination of realistic and authentic visual and audio design with more casual and somewhat arcade gameplay. There are multiple game modes, however the three main ones feature two teams of 15 and last between up to 15 minutes. They are:

Besides these three main modes, which all are available under Random Battles, there are multiple other options, which include 30v30 battles on large maps and other modes.

The game’s developers started to support the esports scene since 2010 and eventually launched Wargaming.net League, which became the main source of high-profile World of Tanks competitions and streams. If you are a fan of World of Tanks and like to watch esports streams and make bets on your favorite team, we suggest adding GGBet.com to your bookmarks as our website offers some of the best odds and lucrative bonuses for online esports betting!